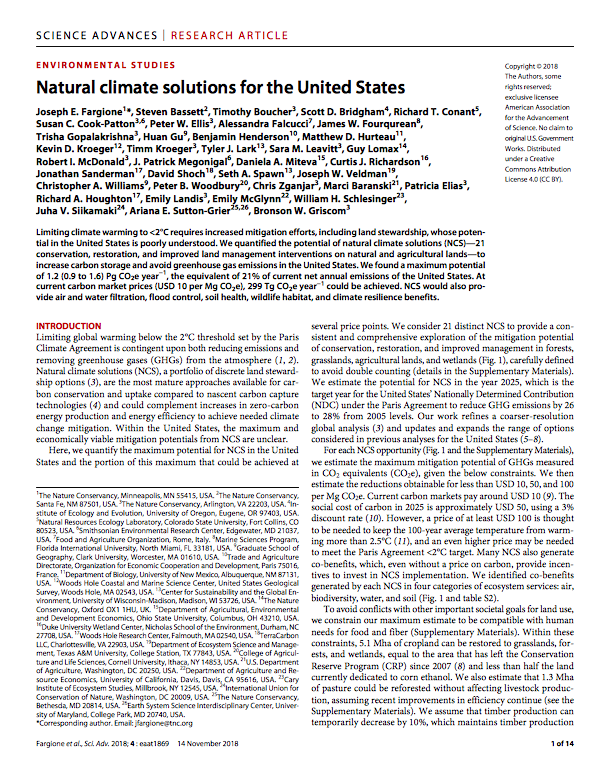 Limiting global warming below the 2°C threshold set by the Paris Climate Agreement is contingent upon both reducing emissions and removing greenhouse gases (GHGs) from the atmosphere. Natural climate solutions (NCS), a portfolio of discrete land stewardship options, are the most mature approaches available for carbon conservation and uptake compared to nascent carbon capture technologies and could complement increases in zero-carbon energy production and energy efficiency to achieve needed climate change mitigation. Within the United States, the maximum and economically viable mitigation potentials from NCS are unclear.

Here, we quantify the maximum potential for NCS in the United States and the portion of this maximum that could be achieved at several price points. We consider 21 distinct NCS to provide a consistent and comprehensive exploration of the mitigation potential of conservation, restoration, and improved management in forests, grasslands, agricultural lands, and wetlands, carefully defined to avoid double counting. We estimate the potential for NCS in the year 2025, which is the target year for the United States’ Nationally Determined Contribution (NDC) under the Paris Agreement to reduce GHG emissions by 26 to 28% from 2005 levels. Our work refines a coarser-resolution global analysis and updates and expands the range of options considered in previous analyses for the United States.

For each NCS opportunity, we estimate the maximum mitigation potential of GHGs measured in CO2 equivalents (CO2e), given the below constraints. We then estimate the reductions obtainable for less than USD 10, 50, and 100 per Mg CO2e. Current carbon markets pay around USD 10. The social cost of carbon in 2025 is approximately USD 50, using a 3% discount rate. However, a price of at least USD 100 is thought to be needed to keep the 100-year average temperature from warming more than 2.5°C, and an even higher price may be needed to meet the Paris Agreement <2°C target. Many NCS also generate co-benefits, which, even without a price on carbon, provide incentives to invest in NCS implementation. We identified co-benefits generated by each NCS in four categories of ecosystem services: air, biodiversity, water, and soil.

To avoid conflicts with other important societal goals for land use, we constrain our maximum estimate to be compatible with human needs for food and fiber. Within these constraints, 5.1 Mha of cropland can be restored to grasslands, forests, and wetlands, equal to the area that has left the Conservation Reserve Program (CRP) since 2007 and less than half the land currently dedicated to corn ethanol. We also estimate that 1.3 Mha of pasture could be reforested without affecting livestock production, assuming recent improvements in efficiency continue. We assume that timber production can temporarily decrease by 10%, which maintains timber production levels within the historic range of variation and enables managed forests and plantations to transition to longer harvest rotations. We assume that extensive natural forests on private lands can all undergo harvest extension, with the temporary loss of timber supply replaced by reforestation and thinning for fire risk reduction or with thinning or select harvest practices that still provide timber but maintain carbon levels. We further constrain our analysis to avoid impacts on biodiversity. This biodiversity constraint precludes both the conversion of natural habitat to energy crops and the afforestation of native grasslands.