North Carolina’s Coasts in Crisis: a Vision for the Future 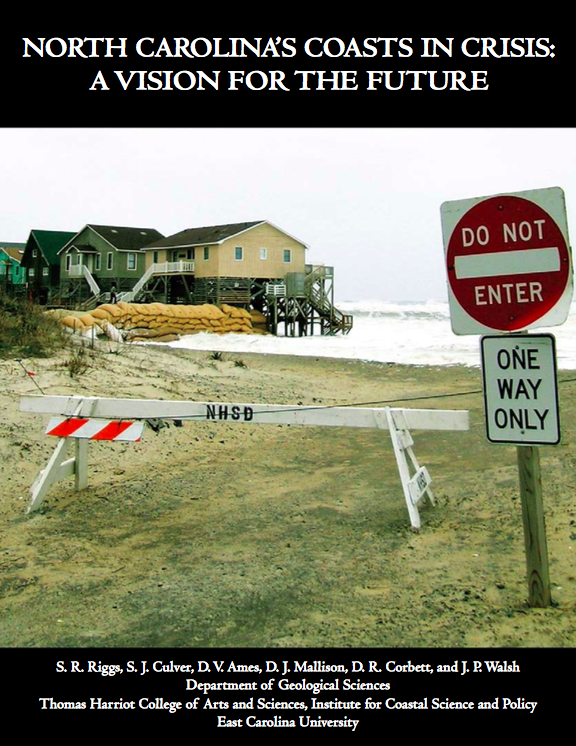 Tide gauge and historical data demonstrate that relative sea level is currently rising in northeastern North Carolina at a rate of 16 to 18 inches per century. One hundred years ago, the rate was 7 inches per century and 200 years ago it was only 3 inches per century. The rate will likely continue to increase into the future as climate continues to warm. The warming climate might also spawn more frequent and intense hurricanes. When so much of down-east North Carolina is just a foot or two above current sea level, we must take note. The future will likely see accelerated rates of coastal erosion and associated loss of urban infrastructure, agricultural land, wetlands, and segments of barrier islands. In addition, there will likely be increased  economic losses due to floods, droughts and storms with a potentially serious impact on the state’s coastal tourism and recreation economy – unless we accept and plan for environmental change, and adapt.

This White Paper is produced for coastal managers, agencies, business owners, politicians, residents of and visitors to the coast – anyone who has an interest in maintaining the unique character of the North Carolina coast that draws so many tourists to it every year. The global climate is warming, the intensity of  tropical storms might increase, and the rate of sea-level rise is increasing. Can we deal wisely with these issues so that we can adapt to the coming changes rather than be overwhelmed by them?