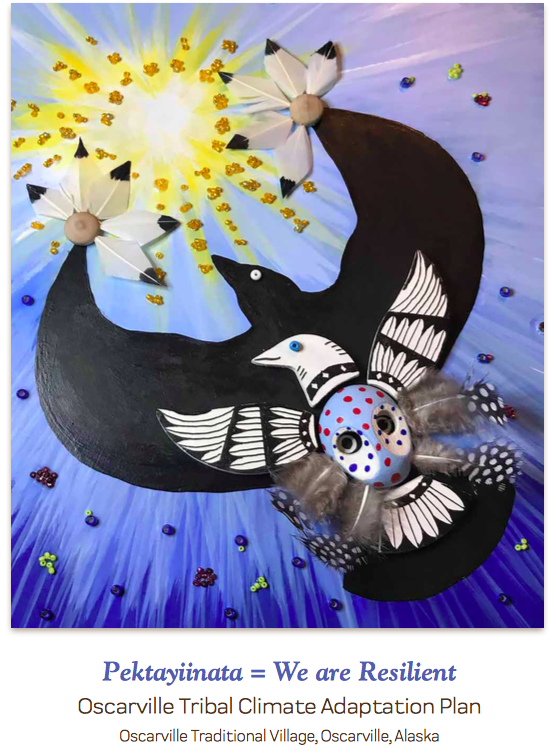 Oscarville is a small, remote Yup’ik community whose primary food resources come from the land, air and sea. This community is deeply rooted in the traditions and culture of the Yup’ik people. Traditional dancing, singing and games highlight the community gatherings.

Alaska indigenous people have a common cultural connection to place. Many of the 11 distinct cultures in rural Alaska prioritize their connection to place and subsistence way of life over the conventional Western amenities. This connection is deeply rooted in access to birds, fish, greens, berries and animals for food security. Many of the rural communities gather a large portion of their food resources locally. The dynamics of this way of life and thinking creates a diverse challenge when planning for community development. Indigenous populations in Alaska are uniquely vulnerable to climate change because of this relationship with, and dependence on, the land, sea, and natural resources for their well-being.

The history of settlement in rural Alaska did not incorporate this element or the involvement of the residents living there. The connection to place and the cultural practices have existed for over 10,000 years in some documented locations. The subsistence lifestyle of rural tribes is valued and prioritized in a very unique manner. Since most settlements were temporary, seasonal subsistence camps later turned into permanent settlements by Westerners, climate change impacts have made it very difficult to adapt appropriately and timely. In the traditional lifestyle, the community would simply relocate to the next seasonal hunting/ fishing location. With the development and implementation of Western technology this tradition no longer exists.

Adaptation in place is simply not an alternative in some cases. Depending on location, some communities stay and protect in place, some slowly relocate, and some have no choice but to completely build a new community elsewhere. Erosion, melting and disintegrating permafrost (permakarsting), severe storm surges and warmer temperatures has caused a very rapid environmental change cycle which is destroying millions of dollars of infrastructure, including sanitation systems, housing, transportation (roads, bridges, waterways) and energy systems. Adaptation to this vicious cycle is forcing a new age of thinking, strategic planning and preparedness that is culturally and environmentally appropriate.

With more frequent and unpredictable weather patterns, the people of Oscarville are having to rethink adaptation and how to respond to a rapidly changing environment. This report utilizes the traditional wisdom of the Yup’ik people and infuses the Western science and research into a new space for value-based decision making for adaptation. Predictions show the Arctic has warmed three times faster than elsewhere in the Northern Hemisphere, reversing a 2000-year cooling trend, and outpacing current climate model predictions.