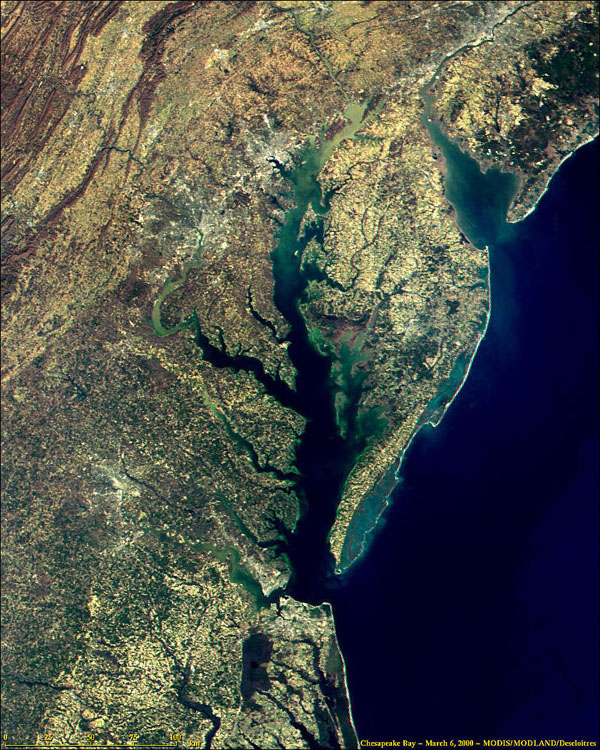 This paper assesses the potential impacts of climate change on the mid-Atlantic coastal (MAC) region of the United States. In order of increasing uncertainty, it is projected that sea level, temperature and streamflow will increase in the MAC region in response to higher levels of atmospheric CO2. A case study for Delaware based on digital elevation models suggests that, by the end of the 21st century, 1.6% of its land area and 21% of its wetlands will be lost to an encroaching sea. Sea-level rise will also result in higher storm surges, causing 100 yr floods to occur 3 or 4 times more frequently by the end of the 21st century. Increased accretion in coastal wetlands, however, which may occur in response to increases in CO2, temperature, and streamflow, could mitigate some of the flooding effect of sea-level rise. Warming alone will result in northward displacements of some mobile estuarine species and will exacerbate the already low summer oxygen levels in mid-Atlantic estuaries because of increased oxygen demand and decreased oxygen solubility. Streamflow increases could substantially degrade water quality, with significant negative consequences for submerged aquatic vegetation and birds. Though climate change may have some positive impacts on the MAC region, such as increased coastal tourism due to warming and some ecological benefits from less-frequent harsh winters, most impacts are expected to be negative. Policies designed to minimize adverse ecological impacts of human activities on coastal ecosystems in the mid-Atlantic, such as decreases in nutrient loading of watersheds, could help mitigate some of the risks associated with future climate variability and change in this region.