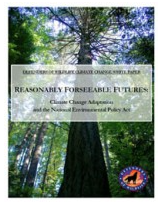 The National Environmental Policy Act (NEPA) clearly has a role to play in how projects with a federal nexus prepare for climate change. To help agencies improve their consideration of climate change, the Council on Environmental Quality (CEQ) in February 2010 released Draft NEPA Guidance, which addressed both emissions and effects of climate change on agency actions and the affected environment. We analyzed 154 Final Environmental Impact Statements released between July 2011 and April 2012, and found that very few incorporated the climate adaptation elements of the 2010 draft guidance. Even the best-performing EISs tended to incorporate climate change into a limited number of the elements of the affected environment, failed to make a full comparison between the various alternatives, or used short and qualitative statements rather than full analysis based on the best available science. This paper explores possible reasons for these deficiencies and presents recommendations for overcoming these obstacles.

Defenders of Wildlife is a national, nonprofit membership organization dedicated to the protection of all native animals and plants in their natural communities.  We work to protect and restore America's native wildlife, safeguard habitat, resolve conflicts, work across international borders and educate and mobilize the public.  We are committed to safeguarding biodiversity from the impacts of climate change by advancing wildlife and ecosystem-based adaptation policies and planning.