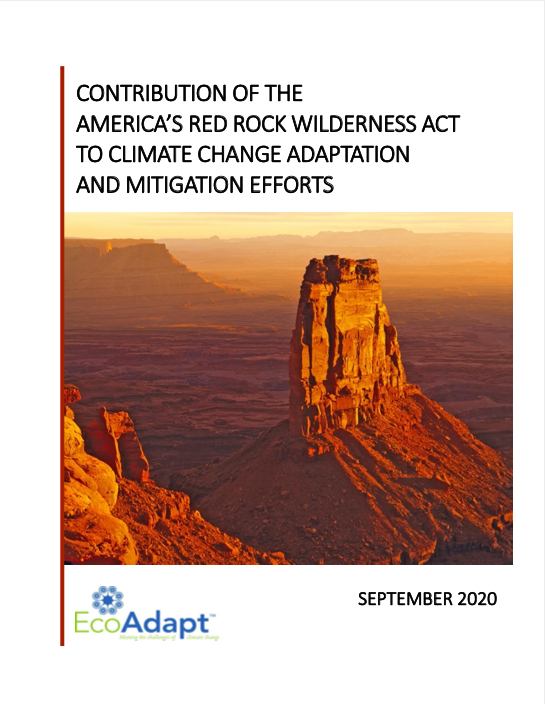 The America's Red Rock Wilderness Act (ARRWA) proposes the protection of around 9 million acres of public lands in Utah under the Wilderness Act of 1964, which is designed to permanently protect intact, high-quality ecosystems. The proposed wilderness lands are dominated by desert, grassland, and shrubland ecosystems within a landscape characterized by rugged mountains and red rock canyons, cliffs, mesas, and other natural formations. The area is home to many rare and/or endemic species and unique biological communities as well as extensive biological soil crusts that play a critical role in soil stabilization, water infiltration, and carbon sequestration in arid landscapes. However, these lands are also under high pressure from oil and gas drilling, mining, off-road vehicle use, and other human activities that degrade the landscape.

This project focused on determining whether and how protection of proposed ARRWA lands would contribute to climate adaptation and mitigation efforts. The final report outlines three ways that permanent protection of ARRWA lands could enhance ecosystem adaptation climate change: protection of potential climate refugia, increased landscape connectivity to facilitate species migration/dispersal and range shifts, and reduction of surface disturbances (e.g., fossil fuel development, livestock grazing, off-road vehicle use) that exacerbate the impacts of climate change. We also present the results of two separate analyses conducted to quantify the climate mitigation benefits of protecting ARRWA lands. First, we estimated the amount of oil, gas, and coal resources present on ARRWA lands and greenhouse gas emissions that would be associated with extraction and combustion of those resources. Second, we modeled carbon stocks on ARRWA lands under future climate conditions, and discussed the role that reducing surface disturbances would play in maintaining ecosystem capacity for carbon sequestration and storage.