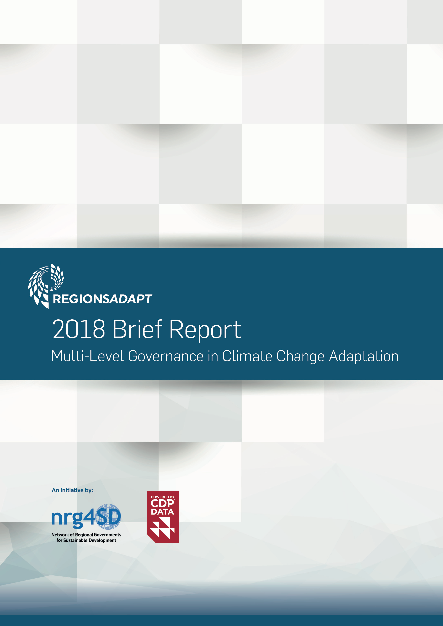 The recently published IPCC Special Report “Global Warming of 1.5°C” reveals an alarming truth in terms of climate change: Global warming has almost reached 1°C compared to the average temperature in the pre-industrial era and is currently increasing by 0.2°C per decade due to past and ongoing emissions. The RegionsAdapt members that reported this and the last years to CDPs states and regions reporting platform are already experiencing the impacts of this global warming, which is also confirmed by the IPCC report. The impacts of climate change pose extensive risks to human lives, infrastructure, socio-economic risks, as well as threats to ecosystems and natural resources, among others. As the report further points out, these risks are likely to intensify in the future, especially taking into consideration that current National Determined Contributions (NDCs) do not contain sufficient actions to limit global warming to well below 2°C. Given these facts, adaptation becomes an urgent necessity for all parts of the world. In order to develop and implement effective adaptation strategies, all levels of government need to be involved in the process. As the data disclosed by regional governments this year shows, more than half of those regions are already involved in the adaptation planning of their national governments and almost all of the disclosing regional governments work closely with their local counterparts. Due to their key position between the national and local level, regional governments promote the coordination and vertical integration of policies, which is key to a coherent and efficient action oriented to lasting results. Regional governments are close to where adaptation actions are required and can incorporate the needs of their societies in adequate adaptation strategies at the regional level and where possible even at the country level.

Additionally, cooperation between regional governments can help them improve their adaptation actions and strategies and overcome obstacles and challenges. In this regard, the Network of Regional Governments for Sustainable Development – nrg4SD – started the RegionsAdapt initiative three years ago at COP 21 in Paris. At the beginning, regional governments that joined the initiative needed to fulfill three initial commitments within two years. The fulfilment of these first 2-years commitments has been assessed in the last RegionsAdapt report in 2017 and showed that the huge majority of the founding members of RegionsAdapt complied with these commitments. In this regard, the commitments have been expanded by two additional 2-year commitment phases, giving the RegionsAdapt members the chance to improve their adaptation strategies and extend the scope of their adaptation actions. Within the three years of the initiative it has become a platform for knowledge exchange, learning and joint projects in different areas related to adaptation.

As part of the aforementioned commitments, RegionsAdapt members are requested to report their data on climate impacts and associated risks, as well as their adaptation efforts to CDP’s states and regions platform. This report reflects the data disclosed by 38 regional governments that are members of the initiative. It demonstrates the awareness and huge potential of regional governments in adapting to a changing climate, their ability to integrate climate policies vertically and their ability to involve different sectors and stakeholders in adaptation planning.