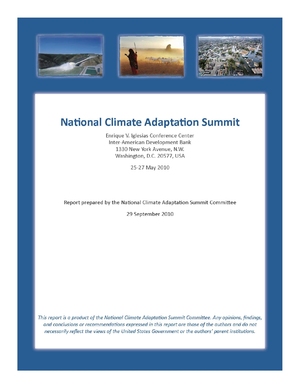 The National Climate Adaptation Summit was in response to a conversation the President’s Science and Technology Advisor, Dr. John Holdren, had with the University Corporation for Atmospheric Research (UCAR) Board members and took place in Washington, DC, on May 25-27, 2010. This event brought together more than 180 users and providers of climate adaptation information to examine the needs, knowledge, and roles required for effective adaptation to climate change. The goal of the Summit was to inform federal, state, regional, and local climate adaptation efforts, including the planning of the federal Interagency Climate Change Adaptation Task Force and the U.S. Global Change Research Program.

There was a strong consensus among participants that wise adaptation measures can help minimize the negative impacts of a changing climate on our Nation’s communities, businesses, ecosystems, and citizens. Effective adaptation will require improved coordination within agencies and among agencies, states, regions and the private sector. It also calls for new methods of communication; sharing of best practices; budget increases in a few key areas; research to produce needed missing information; development of new partnerships; and ‘learning by doing’, or adaptive adaptation.