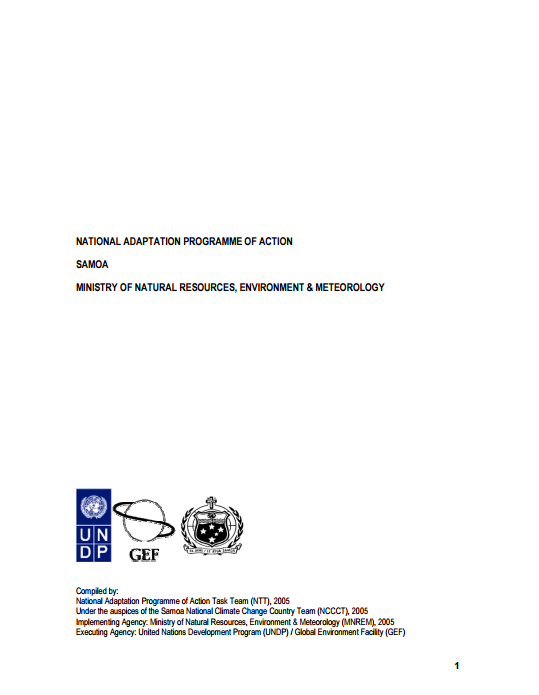 The necessity to communicate Least Developed Countries’ (LDC) most urgent and immediate adaptation needs from the adverse impacts of climate change was formalized at the 7th Conference of the Parties in 2001. Samoa was one of the first countries to receive funding from the Global Environment Facility (GEF) under the LDC Fund to develop its National Adaptation Programme of Action (NAPA). After two years of comprehensive information and data collection, as well as countrywide consultations, Samoa’s NAPA preparation project has achieved its objectives.

The ‘Samoa Climate Change Synthesis Report: National Adaptation Programme of Action 2004’ (The Synthesis Report, 2004) has been completed and this report has created opportunities for synergies with other multilateral agreements particularly the Convention on Biological Diversity (CBD), and the United Nations Convention to Combat Desertification (UNCCD) for collaborative and integrated actions in adaptation responses. A nationally driven set of criteria for prioritization has also been developed and utilized to prioritize the adaptation actions in the national programme. The development of Samoa’s NAPA has been an exceptional learning experience for all those involved, particularly the National Climate Change Country Team (NCCCT) and National Task Team (NTT). By adopting an integrated approach, all the relevant stakeholders (both in government and non-government organizations) have been able to work hand in hand to ensure that those whose livelihoods are most vulnerable to adverse impacts of climate change impart the urgency and immediacy of the adaptation needs.

The purpose of this report is to examine Samoa’s main environmental pressures within each highly vulnerable national sector, including the livelihoods of communities. These sectors have been developed into project profiles which include issue statements and provide a summary of the profile’s objectives, activities, inputs, outputs and outcomes (see Annex I-1 – I-9) that have been set and agreed to by government, the private sector and most importantly the village communities, using nationally driven criteria.

It is intended that the contents of this document will provide the GEF with indications of Samoa’s most urgent and immediate climatic adaptation needs. Moreover, it is envisaged that partnerships which Samoa has established with its other development partners will be strengthened to explore additional opportunities and support for implementation of the NAPA.

The Government of Samoa gratefully acknowledges the assistance of GEF and the United Nations Development Programme (UNDP) in extending the financial assistance towards the development of its NAPA.