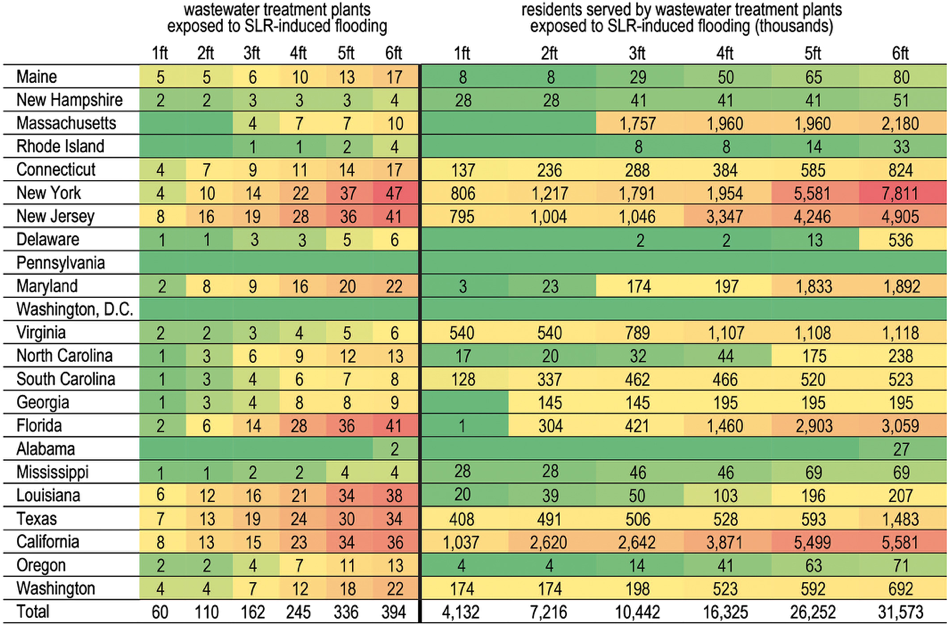 As sea levels rise, coastal communities will experience more frequent and persistent nuisance flooding, and some low‐lying areas may be permanently inundated. Critical components of lifeline infrastructure networks in these areas are also at risk of flooding, which could cause significant service disruptions that extend beyond the flooded zone. Thus, identifying critical infrastructure components that are exposed to sea level rise is an important first step in developing targeted investment in protective actions and enhancing the overall resilience of coastal communities. Wastewater treatment plants are typically located at low elevations near the coastline to minimize the cost of collecting consumed water and discharging treated effluent, which makes them particularly susceptible to coastal flooding. For this analysis, we used geographic information systems to assess the exposure of wastewater infrastructure to various sea level rise projections at the national level. We then estimated the number of people who would lose wastewater services, which could be more than five times as high as previous predictions of the number of people at risk of direct flooding due to sea level rise. We also performed a regional comparison of wastewater exposure to marine and groundwater flooding in the San Francisco Bay Area. Overall, this analysis highlights the widespread exposure of wastewater infrastructure in the United States and demonstrates that local disruptions to infrastructure networks may have far‐ranging impacts on areas that do not experience direct flooding.