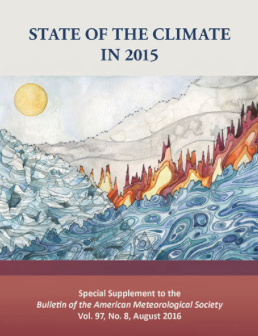 An international, peer-reviewed publication released each summer, the State of the Climate is the authoritative annual summary of the global climate published as a supplement to the Bulletin of the American Meteorological Society. The report, compiled by NOAA’s Center for Weather and Climate at the National Centers for Environmental Information is based on contributions from scientists from around the world. It provides a detailed update on global climate indicators, notable weather events, and other data collected by environmental monitoring stations and instruments located on land, water, ice, and in space.

This is the 26th edition of the annual assessment now known as State of the Climate. The year 2015 saw the toppling of several symbolic mileposts: notably, it was 1.0°C warmer than preindustrial times, and the Mauna Loa observatory recorded its first annual mean carbon dioxide concentration greater than 400 ppm. Beyond these more recognizable markers, trends seen in recent decades continued.