The Status of Tribes and Climate Change Report (STACC) 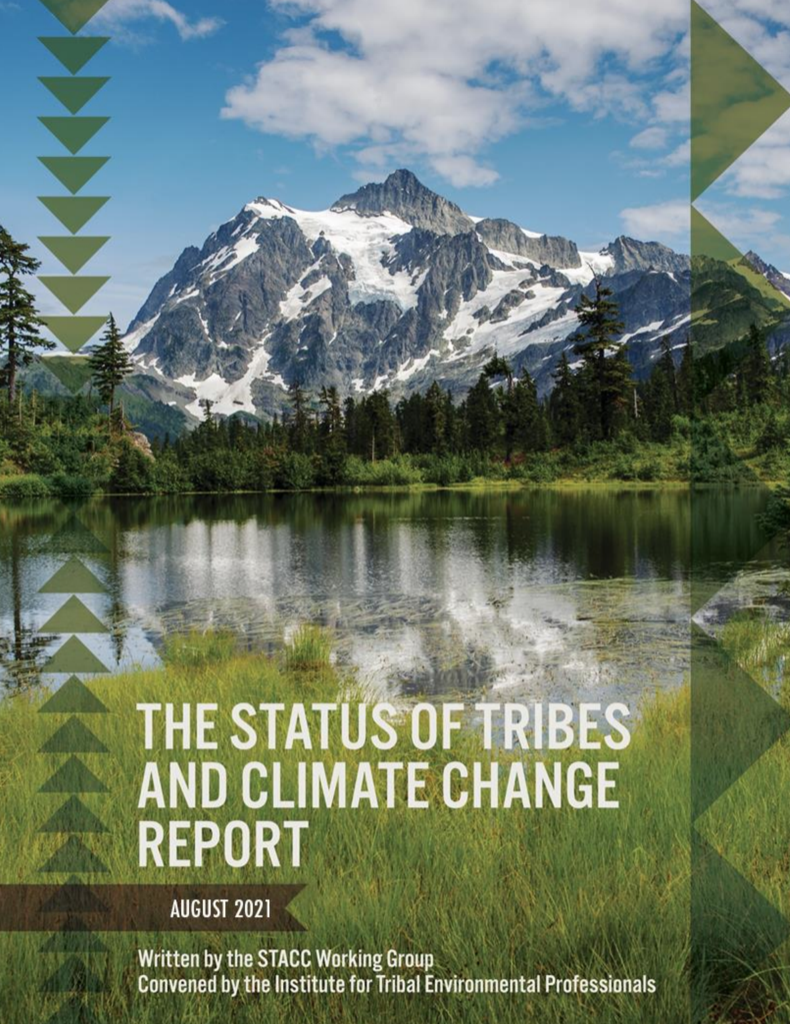 The Report was written for diverse audiences including Tribal managers, leaders, and community members; the authors of future National Climate Assessments; federal and state agencies and decision makers; and non-governmental organizations.

In addition, the Report includes 34 narrative submissions directly from Tribes, which acknowledge the diverse voices that speak of the innovative, active, collaborative projects addressing the serious challenges that Tribes and Indigenous people face, their searches for solutions, their use of both Traditional Knowledges and Western science, and much more. This inaugural Report is the first of many to come.

The Status of Tribes and Climate Change (STACC) Report seeks to uplift and honor the voices of Indigenous peoples across the U.S. to increase understanding of Tribal lifeways, cultures, and worldviews, the climate change impacts Tribes are experiencing, the solutions they are implementing, and ways that all of us can support Tribes in adapting to our changing world. This report was convened by the Institute for Tribal Environmental Professionals (ITEP) Tribes and Climate Change Program and written by the STACC Working Group.

The climate is changing. Global air temperatures are rising, as are sea levels throughout most of the U.S.  Heavy rainfall is increasing in intensity and frequency. Atlantic hurricane intensity is on the rise, and the number of large forest fires in the western U.S. and Alaska is increasing and is exacerbated by drought and heat. In Alaska and the Arctic, sea ice is declining, permafrost is thawing, and warming is more than twice the global average (Walsh et al., 2014; Hayhoe et al., 2018; USGCRP, 2017).

Given close relationships with the natural world stemming from deep spiritual and cultural connections and subsistence life-ways, Indigenous peoples are on the frontlines of those experiencing and adapting to climate change. Indigenous peoples possess incredible resiliency and innovation, borne from Indigenous knowledges, worldviews, and countless generations of connection to place (Ford et al., 2020). At the same time, climate change impacts for many Tribal communities are already severe (such as shifts in/loss of key cultural species and land loss due to erosion, flooding, and permafrost thaw), and the challenges they face responding to impacts are daunting (such as lack of funding and technical resources and legacies from colonialism and discrimination). The time to act is now, and the way to act is together: in community, taking care of one another and all our relations.

What Is the Status of Tribes and Climate Change (STACC) Report?

The Status of Tribes and Climate Change (STACC) Report seeks to uplift and honor the voices of Indigenous peoples across the U.S. to increase understanding of Tribal lifeways, cultures, and worldviews; the climate change impacts Tribes are experiencing; the solutions they are implementing; and ways that all of us can support Tribes in adapting to our changing world. Given this, the STACC Report was written for diverse audiences, including Tribal managers, leaders, and community members; the authors of future National Climate Assessments; federal and state agencies and decision-makers; and nongovernmental organizations. Over 90 authors representing diverse entities and perspectives contributed to this report, including the authors of 34 personal narratives and author teams who wrote topic reviews using elements from their own experiences and knowledge as well as information from the most current peer-reviewed literature. The development of the STACC Report was coordinated by the Institute for Tribal Environmental Professionals (ITEP), which was established in 1992 at Northern Arizona University with a cooperative agreement with the Bureau of Indian Affairs’ Tribal Climate Resilience Program. ITEP is honored to have worked with these authors, who together, along with the Steering Committee, form the STACC Working Group.

Why This Report Was Created

The Indigenous peoples of North America have seen many hardships, including legacies of colonialism, forced assimilation, intergenerational trauma, upheaval and repression of Native economic systems, and the loss of ancestral lands, languages, natural resources, and traditions. Due to colonialization and subsequent land dispossession, social exclusion, and discrimination, researchers have identified Indigenous peoples globally and in the U.S. as populations “at-risk” to environmental change (Ford et al., 2020; Nakashima et al., 2018). Tribes have, however, continually proven to be resilient and innovative, which is evident in their creating adaptation and mitigation plans and continuing to rely on traditional knowledges to inform actions and strategies. This resiliency and adaptation dates back thousands of years and holds true in today’s changing climate.

As numerous Indigenous persons would attest to, the close relationship that Tribes have with their lands, waters, resources, and heritage includes a responsibility to one another, to all relations, and to the past and future generations of human and nonhuman relatives alike. It embodies the need to care for and respect the needs of all things and recognizes the responsibility to honor the wisdom of their ancestors and carefully consider the consequences of their decisions and actions for future generations. This may lead Tribal members to ask: what does it mean to be a good ancestor?

Due in part to these worldviews that are tightly interwoven with many compounding dimensions, Tribal experiences with climate change can make Indigenous peoples particularly vulnerable to cascading and disproportionate impacts, while their responses simultaneously support Tribal resilience to those impacts and are discussed throughout the STACC Report.

While Tribes cannot be thought of as one monolithic group, diverse Indigenous persons are in dialogue about synergies that exist among their worldviews. Numerous Indigenous persons have articulated that their worldviews understand all things as an interconnected whole, the Indigenous Holistic Worldview Illustration. There is inherent difficulty in writing a report that includes sectoral chapters about impacts experienced by Indigenous peoples that also reflects the interconnected nature of those experiences. However, each topic is interwoven with the others and all the systems of the world.

Although Indigenous peoples have been involved in various scientific reports related to climate change, a gap exists in the published literature of a holistic, in-depth review of the unique experiences of and threats to Tribes, in particular with first-hand experiences described. The STACC Report aims to fill this gap as well as provide recommendations for decision-makers and others supporting Tribal efforts.