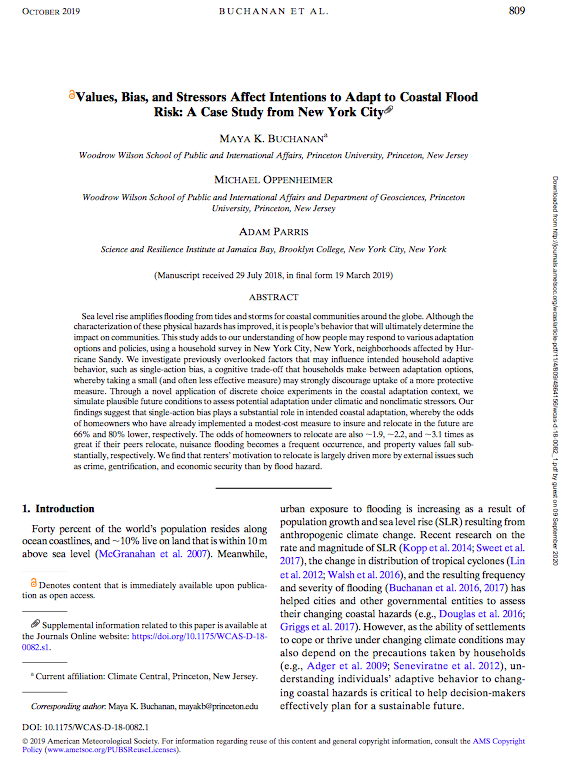 Sea level rise amplifies flooding from tides and storms for coastal communities around the globe. Although the characterization of these physical hazards has improved, it is people’s behavior that will ultimately determine the impact on communities. This study adds to our understanding of how people may respond to various adaptation options and policies, using a household survey in New York City, New York, neighborhoods affected by Hurricane Sandy. We investigate previously overlooked factors that may influence intended household adaptive behavior, such as single-action bias, a cognitive trade-off that households make between adaptation options, whereby taking a small (and often less effective measure) may strongly discourage uptake of a more protective measure. Through a novel application of discrete choice experiments in the coastal adaptation context, we simulate plausible future conditions to assess potential adaptation under climatic and non-climatic stressors. Our findings suggest that single-action bias plays a substantial role in intended coastal adaptation, whereby the odds of homeowners who have already implemented a modest-cost measure to insure and relocate in the future are 66% and 80% lower, respectively. The odds of homeowners to relocate are also ~1.9, ~2.2, and ~3.1 times as great if their peers relocate, nuisance flooding becomes a frequent occurrence, and property values fall substantially, respectively. We find that renters’ motivation to relocate is largely driven more by external issues such as crime, gentrification, and economic security than by flood hazard.