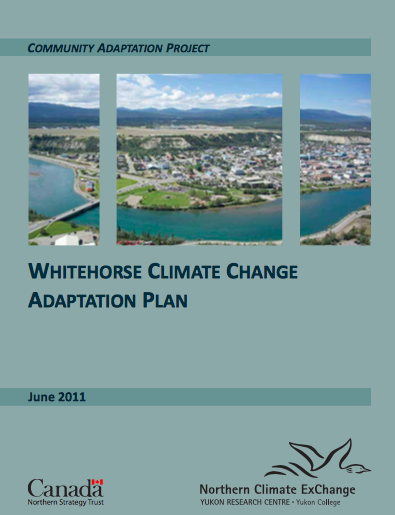 Climate has been changing in Whitehorse. It is clear from weather data going back to the 1940s that temperature has been warming, especially in winters. Spring break up has been arriving earlier, freeze up later and frost free days have been increasing. The Whitehorse Community Adaptation Project, or WhiteCAP, funded by the Northern Strategy Trust, begins the process of preparing Whitehorse for climate change. WhiteCAP consists of two distinct phases: planning and implementation. The WhiteCAP plan assesses how climate change may positively or negatively affect the community over the next forty years, to 2050. The first half of the planning process focuses on exploring multiple scenarios of how the community may change by 2050, and is presented in the companion document for this plan: Future Histories of Whitehorse: Scenarios of Change. The second half of the planning process assesses the risks of climate change impacts and then the priorities of climate change adaptations. Portions of the plan have been implemented in the second year of the WhiteCAP project.

Yukon is larger than life with breathtaking wilderness, a wealth of opportunities, abundant natural resources and friendly welcoming people. It is home to a skilled and educated work force, modern infrastructure and endless options for outdoor activities year-round.