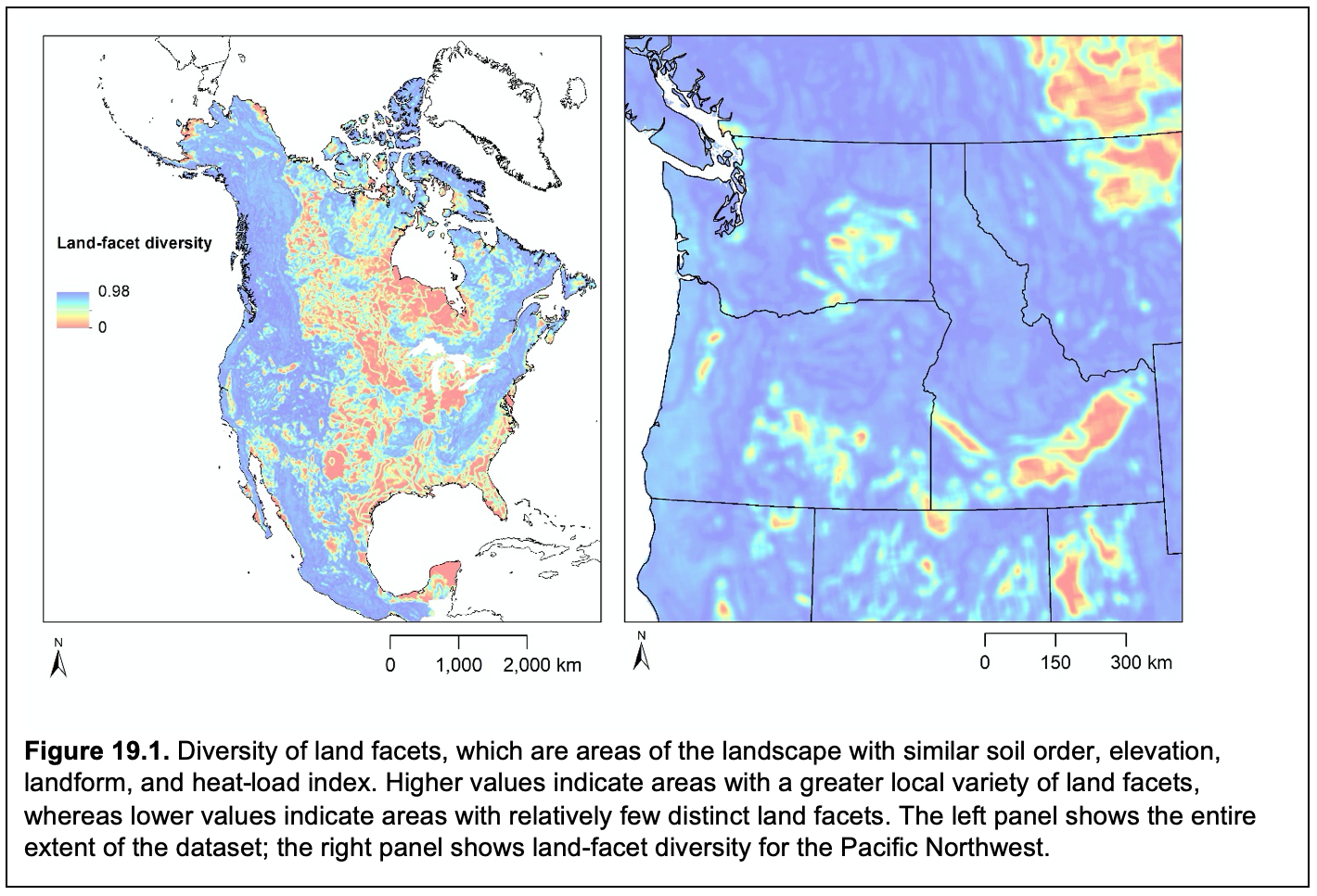 The dataset can be downloaded from: https://adaptwest.databasin.org/pages/environmental-diversity-north-america

Formal metadata is not available for this dataset.

Elevation, slope, HLI, and topographic position index (TPI) were obtained from a digital elevation model (DEM) at 100-m resolution. Calculation of HLI is explained in McCune and Keon (2002); calculation of TPI is explained in Jenness (2006). Diversity of HLI and elevation were calculated by comparing all pairs of pixels within a 27-km moving window (spatial neighborhood around the pixel of interest). Landforms were classified based on categories of slope (flat, gentle, and steep) and TPI. Land-facet categories were derived from classifications of elevation (10 bins), HLI (warm, neutral, and cool), landforms, and 38 soil orders. Ecotypes--also known as ecological land units--were obtained from Sayre et al. (2014) and represent landscape categories based on climate, landform, lithology, and land-cover type. Diversity of land-facets and of ecotypes was calculated using the Gini-Simpson diversity index and a 27-km moving window. For more information, please consult the dataset citation listed in section 2 of this chapter.

This dataset relied on the following general types of models: Terrain or geomorphology models

This dataset relates to species’ adaptive capacities, specifically the ability of species to access newly suitable climates in areas within or nearby their historical ranges. Given comparable levels of climate-change exposure, areas with greater environmental diversity (as represented by the data layers in this dataset) are generally expected to have reduced vulnerability (due to greater adaptive capacity) for two main reasons. First, locations with high geophysical diversity are generally correlated with higher levels of biodiversity. Second, a high diversity of topographic conditions increases the likelihood that a variety of microclimatic conditions are present that could serve as refugia (Beier et al., 2015). In other words, areas with diverse environmental conditions are expected to increase the likelihood that species will be able to find and access newly suitable habitats as climate conditions change (Carroll et al., 2017).

These concepts illustrate the conservation idea known as “conserving the stage” or “conserving nature’s stage” (Beier et al., 2015). This approach to conservation in the face of climate change suggests that conserving a diverse set of physical environmental conditions (the “stage”) can be an effective “coarse-filter” approach to conserving many individual species (the “actors”). This approach is commonly juxtaposed with other “fine-filter” approaches that focus on individual species. The diversity of physical environmental conditions in an area has been quantified in different ways by different research teams, but generally incorporates information on landscape topography (e.g., shaded slopes versus sunny slopes), soil types, and geology.

Topographic data layers derived from DEMs (such as slope, TPI, and HLI) are sensitive to the spatial resolution of the input DEM. This study used a 100-m DEM as input, therefore finer-resolution topographic features could not be discerned and small-scale (e.g., 10-m or 30-m) topographic diversity was not accounted for, although it might be important to certain species' responses to climate change. Furthermore, complex patterns of microclimate and diversity of microclimates can arise from factors not included in these datasets. Such considerations include latitude, season, disturbance patterns and succession, formations of fog, dew, and frost, wind patterns and their potential to redistribute precipitation, and biological feedbacks that affect soil characteristics.

Uncertainty was not quantified for the individual data layers in this environmental-diversity dataset. Sources of uncertainty associated with these datasets include mapping accuracy of soils and lithology datasets, the definition and classification of landforms, and whether, in general, the quantified topoedaphic variables appropriately capture features important to biodiversity and climatic resilience. The study that produced these datasets did include a comparison among the different data layers, informed by: correlations among data layers, relationships to elevation, and the spatial conservation priorities that would be derived from each data layer. The study that produced these datasets also examined climate velocity (not covered in this guidebook chapter) and did quantify uncertainty for this velocity data layer regarding variability across climate models and greenhouse-gas scenarios.

Creation of this dataset did not involve any field verification of the mapped values.