This dataset provides estimates of climate-change velocity (Hamann et al. 2015) produced in several ways (see chapter glossary for definitions of terms). Forward velocity provides a measure of the rate at which an organism would need to migrate over the land surface to maintain similar climate conditions, as regional climate conditions change. Backward (or reverse) velocity utilizes a target location (pixel) of interest and measures the rate at which an organism from similar climate conditions would need to migrate to colonize that target pixel (figure 2.1). These two types of multivariate climate velocity metrics can complement each other. Whereas forward velocity provides climate-change exposure information for species or populations inhabiting particular areas, backward velocity provides information for the areas themselves, in terms of the accessibility of those locations to the biotic communities that could potentially inhabit them in the future. 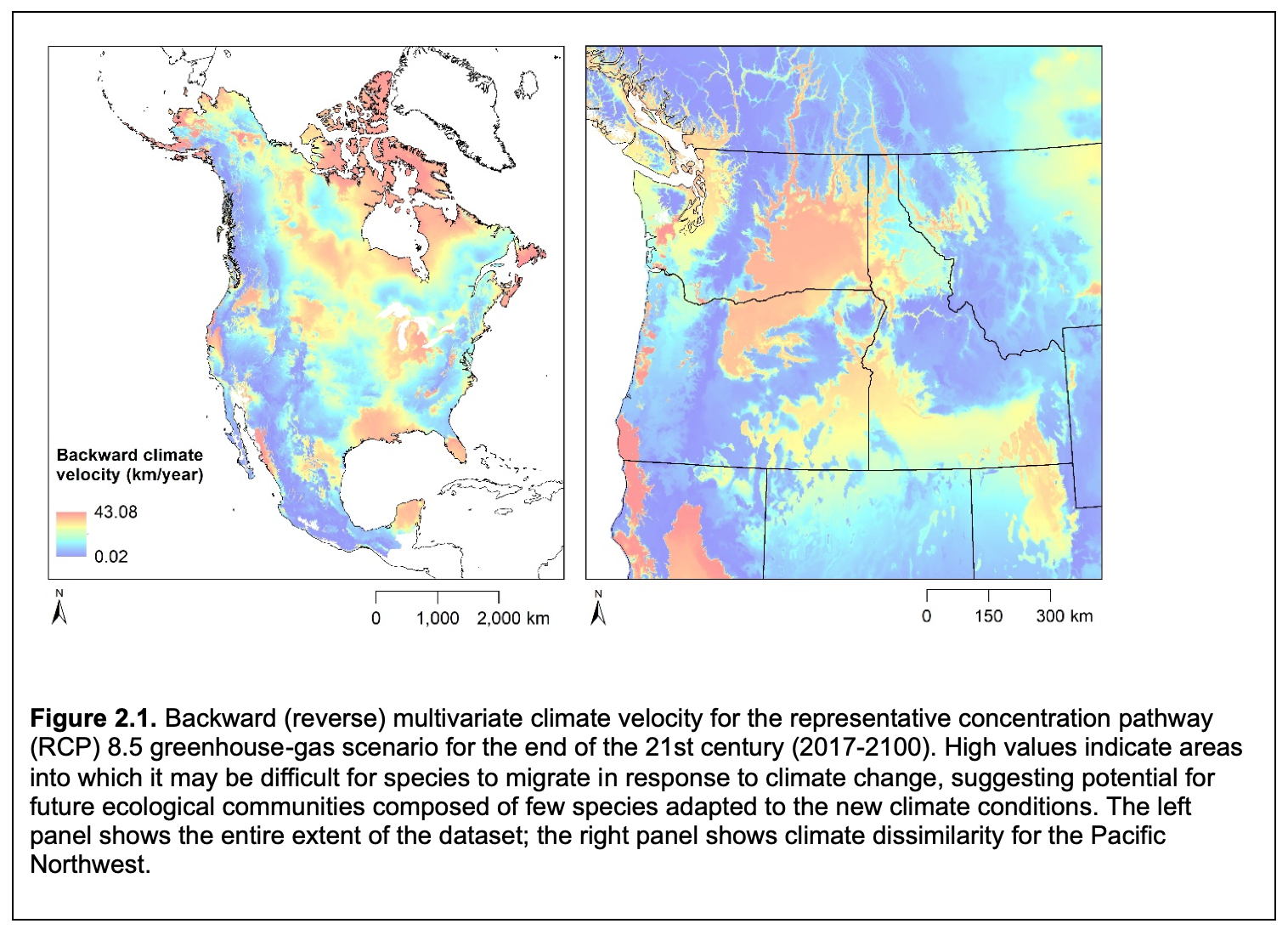 The dataset can be downloaded from: https://adaptwest.databasin.org/pages/adaptwest-velocitywna

Note: the two journal articles referenced above describe the general methods used to derive this dataset, however, the dataset at the link above is an updated version of an original dataset that is available from: https://adaptwest.databasin.org/pages/adaptwest-velocitywna-cmip3.

Data type category (as defined in the Introduction to this guidebook): Climate

Dataset truncation: The dataset is truncated along the border separating Mexico from Guatemala and Belize

Baseline time period (against which future conditions were compared): 1981-2010

Methods overview: First, 11 climate variables were synthesized using Principal Components Analysis. These 11 variables included: mean annual temperature, mean temperature of the warmest month, mean temperature of the coldest month, mean annual precipitation, mean growing season (May to August) precipitation, degree-days above 5 °C, number of frost-free days, and several indices representing moisture conditions. The results of this analysis were used to find, for each pixel with its given current climate conditions, a set of future climate analogs, i.e., a set of pixels that are predicted to have similar climate conditions in the future. Then, the geographically nearest pixel with analogous future climate was selected and used to calculate climate velocity, which is the straight-line distance from the target pixel of interest to its nearest analog, divided by the time difference between the current time period and the future time period under consideration. For more information, please consult the dataset citation listed in section 2 of this chapter.

Creation of this dataset involved the following methods to change the spatial resolution of climate models (e.g., to downscale or resample climate models):

Downscaling of climate models was not conducted as part of the study that produced this dataset, however, downscaled climate projections were used as inputs. Information on downscaling methods that produced these inputs is available from Wang et al. (2016).

Forward climate velocity primarily represents climate-change exposure for species inhabiting the geographic areas considered. High forward climate velocity values may suggest a greater threat of local extirpation of species inhabiting a site due to the rapid migration that would be needed to track changing climate conditions. Backward (reverse) climate velocity primarily represents climate-change implications for the geographic area itself that is being considered. High backward velocity indicates that it might be difficult for species to colonize that site in the future (in response to climate change), and according to Carroll et al. (2015), "a site with high backward velocity is threatened with holding a depauperate complement of species adapted to its future climate, with consequent effects on ecosystem function and services".

This dataset represents two ways of conceptualizing climate-change vulnerability based on climate-change exposure (forward and backward climate velocity). Both types of climate velocity have implications for the adaptive capacity of organisms to respond to climate change by migrating across the landscape to track suitable climate conditions. These two types of climate velocity provide different, and potentially complementary, types of information. Locations with high forward velocity may have species at greater risk of local extirpation, whereas locations with high backward velocity may be at greater risk of having few future species adapted to the new local climate. Consideration of multiple metrics of climate-change exposure (including forward and backward velocity along with additional metrics) along with species’ sensitivity to climate change and capacity to adapt to changing conditions is important for a holistic assessment of potential climate-change vulnerability for a given location, habitat, or species range.

Unlike the related concept of "biotic velocity" (see Carroll et al., 2015), climate velocities in this dataset do not consider species-specific climate tolerances. Therefore, the backward and forward climate velocities in this dataset represent an upper bound on the migration rate required, because for some species slower migration rates will be enabled due to greater tolerance of changing climate conditions and potentially greater ability to persist in place. In addition, because the hypothetical migration trajectories to future climate analogs were conceptualized as straight lines, actual barriers on the landscape impeding migration were not considered. These might include human-created barriers (e.g., transportation infrastructure or land use) as well as intervening areas of inhospitable climate (e.g., a warm valley separating two cold mountain peaks).

This dataset does not include any quantification of uncertainty relating to the mapped values.

Field verification of the mapped values in this dataset was not possible because the dataset represents a future condition. Datasets representing the baseline time period were derived from downscaled climate grids from the ClimateNA dataset (Wang et al. 2016). Accuracy of the baseline climate variables in the ClimateNA dataset was assessed using monthly mean observations from 4,891 weather stations across North America, located predominantly in the United States; see table 2 in Wang et al. (2016).