This dataset includes future projections of fire regime change in the western U.S., specifically changes in fire frequency (represented as fire return interval, FRI, figure 7.1) and fire severity (represented as percent replacement severity, PRS), as well as vegetation classes (see chapter glossary for definitions of terms). These data layers were produced using a climate analog approach, in which the projected future climate conditions of each pixel (i.e., each target location) were compared to other pixels’ historical climate conditions. The underlying principle is that, for a given location with projected future climate conditions, that location's future vegetation and fire regime can be inferred by examining the current vegetation and fire regime of climate analogs (locations with current climate similar to the future climate of the target location).

Data Access: The dataset may be obtained by contacting the corresponding author. 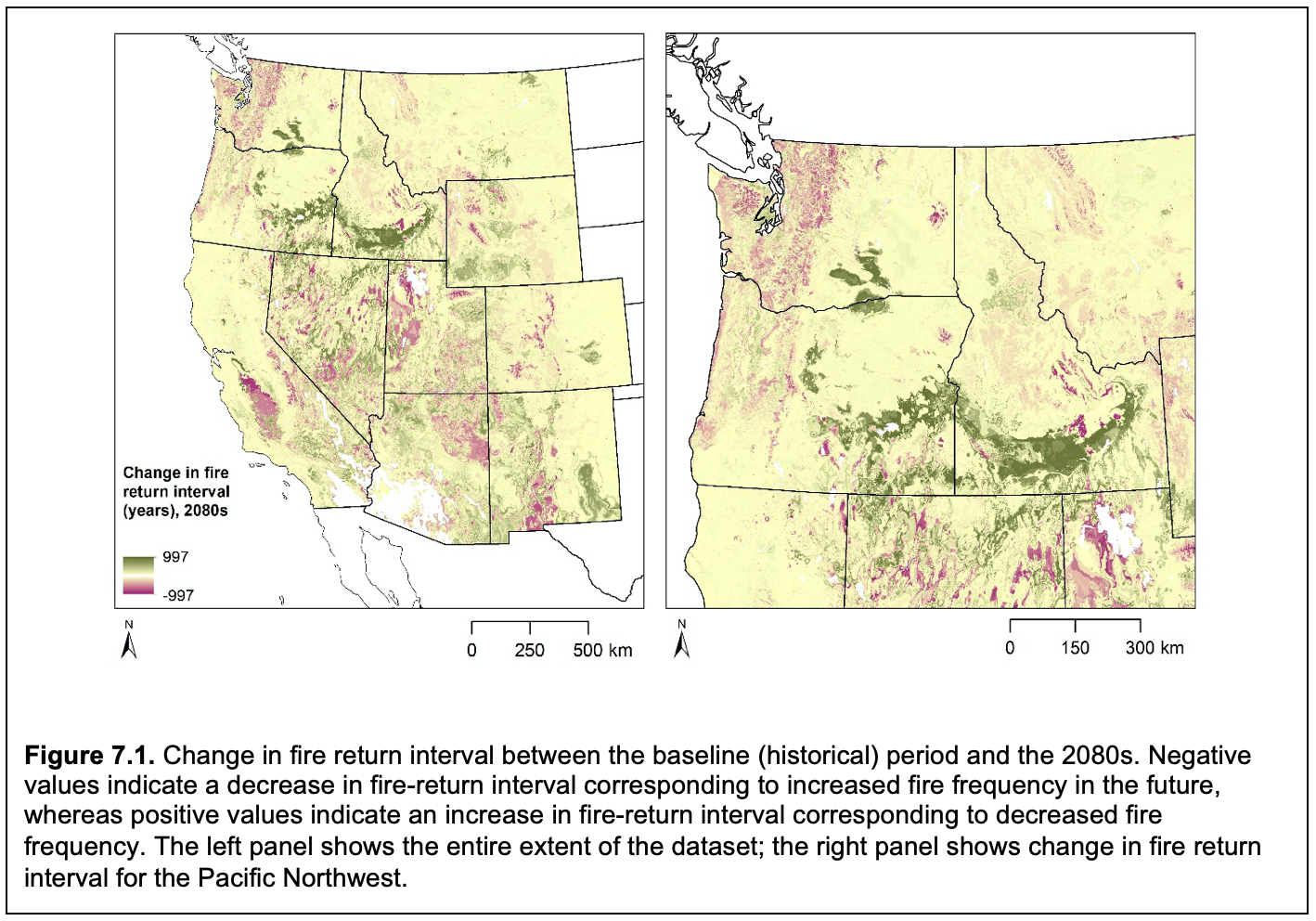 The dataset may be obtained by contacting the corresponding author.

Data type category (as defined in the Introduction to this guidebook): Fire, vegetation

Dataset truncation: The dataset is truncated along the United States borders with Canada and Mexico and along the eastern borders of Montana, Wyoming, Colorado, and New Mexico.

Baseline time period (against which future conditions were compared): 1961–1990.

Estimates of reference vegetation and fire regime variables were used to represent the period from approximately 1700 to 1900. For each pixel, climate data (climatic moisture deficit and evapotranspiration) were used to identify climate analogs, i.e., pixels with historical climate conditions similar to (analogous to) the projected future climate of the target pixel. Thus, climate analogs can be thought of as "incoming climates" because they represent the climate conditions that are anticipated to occupy a target pixel in the future (Parks et al. 2018). For the target pixel, the three geographically nearest climate analog pixels were identified and fire regime variables (FRI and PRS) were averaged, to enable comparison of reference fire variables to those variables from the averaged analogs. A similar analog-based approach was also used to examine changes in vegetation, represented as broad vegetation classes. For more information, please consult the dataset citation listed in section 2 of this chapter.

This dataset relied on the following general types of models: Climate-analog modeling.

The dataset integrates components of climate-change exposure (in that spatial differences across the landscape in climatic moisture deficit and evapotranspiration were used to drive the analysis) and sensitivity to change (in that climate analogs were used to infer potential changes to vegetation and fire regime characteristics). These changes can inform an overall assessment of climate vulnerability for a given location, related to the expected magnitude and direction of change for fire regime characteristics.

As described in chapter 6, projected climate-driven changes to fire regimes have a range of potential consequences for species, ecosystems, and watershed processes, as well as for human society. Changes in fire frequency and/or intensity may affect different species in different ways (e.g., some species may benefit from more frequent fires while others are negatively affected). In addition, projected changes to fire dynamics may interact with other climate-driven changes to habitats, such as changes in watershed hydrology, changes to seasonal timing, and invasive species and forest pest dynamics.

The analog-based approach used to produce this study implicitly assumes that climate, fire regimes, and vegetation are in equilibrium, and that there are no lags between changing climate and changing vegetation and fire patterns. Specifically, this analysis does not account for natural and human-caused disequilibrium between climate, vegetation, and fire. Natural disequilibrium arises, for example, when long-lived organisms such as trees can survive and persist under a warming climate even though seedlings of the same species cannot. Human-caused disequilibrium results from human actions such as fire suppression, prescribed burns, agricultural and grazing operations, and landscape fragmentation. The analog-based approach used to produce this dataset is not a process-based model and so does not explicitly represent processes of interest, such as carbon dioxide fertilization and vegetation feedbacks to fire dynamics. Notably, only two climate variables were used in the analysis to produce the dataset, although a parallel analysis with 26 climate variables (some of which represented climate extremes and seasonality) produced similar results. In addition, the reference-period fire regime and vegetation data used in the analysis have inaccuracies that are not quantified due to missing information on fire histories in some land cover types. Lastly, invasive species (some of which are known to substantially alter fire regimes) are not incorporated into this analysis.

Results from this analysis were potentially sensitive to a number of choices in the analysis, so a sensitivity analysis was conducted for several of these parameters, including bin size (the breadth of climate conditions used to define analogs), the number of analogs used for averaging of fire regime characteristics, and the number and type of climate variables used to define climate analogs.

Field verification of the mapped values in this dataset was not possible because the dataset represents a future condition. Historical fire regime and vegetation variables also could not be field-verified due to limited historical data.