This dataset is a compilation of spatial polygons representing the unburned areas (that include fire refugia) within 2,298 fires from 1984 to 2014 within eastern Washington, eastern Oregon, and Idaho (see chapter glossary for definitions of terms). On average, 10% of the area within mapped fire perimeters are unburned areas (Meddens et al. 2018), yet these areas have rarely been mapped and are typically not represented in fire perimeter datasets. Therefore, this dataset is the first comprehensive database of recent unburned areas (including fire refugia) for this region of the Pacific Northwest (figure 8.1). 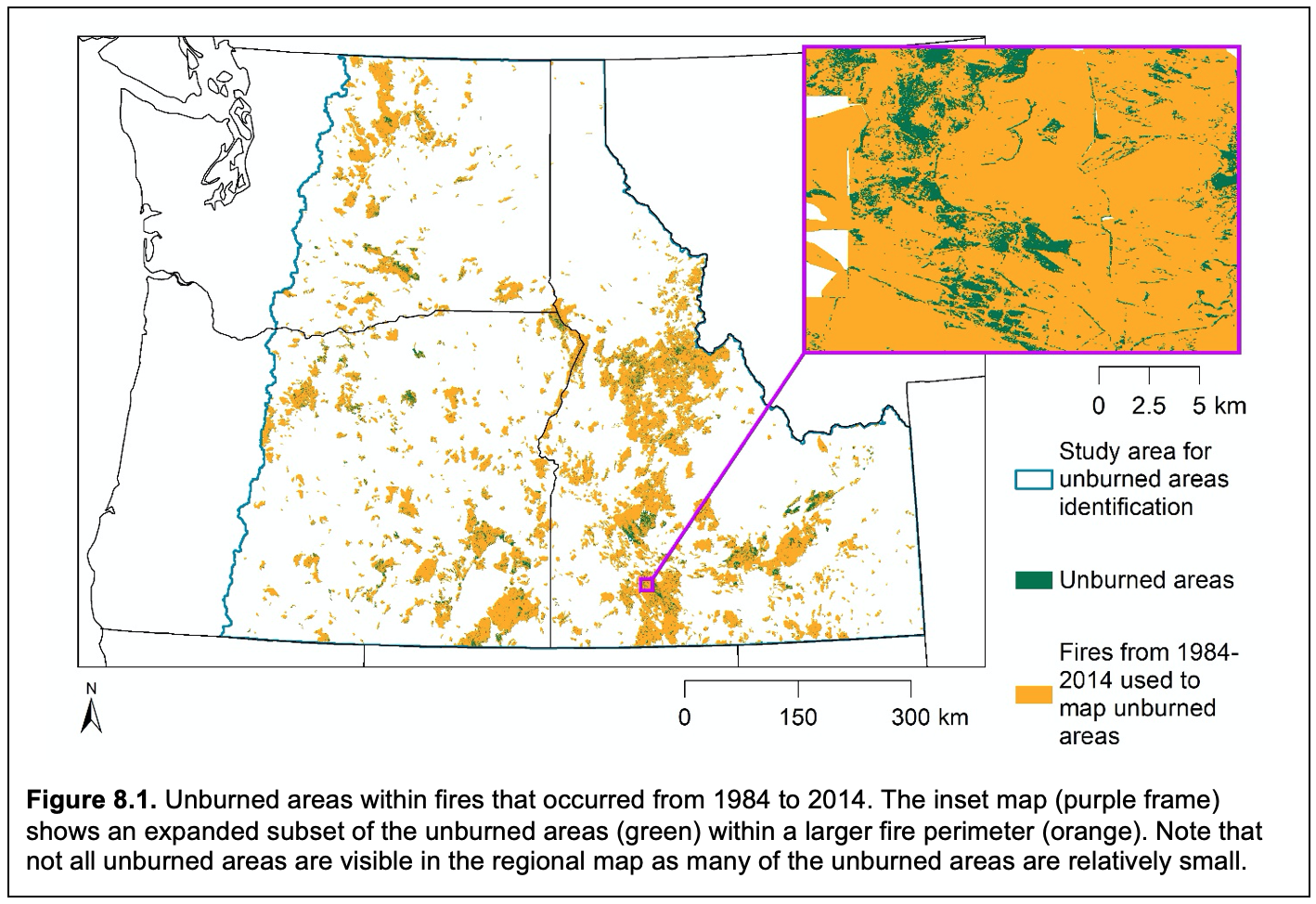 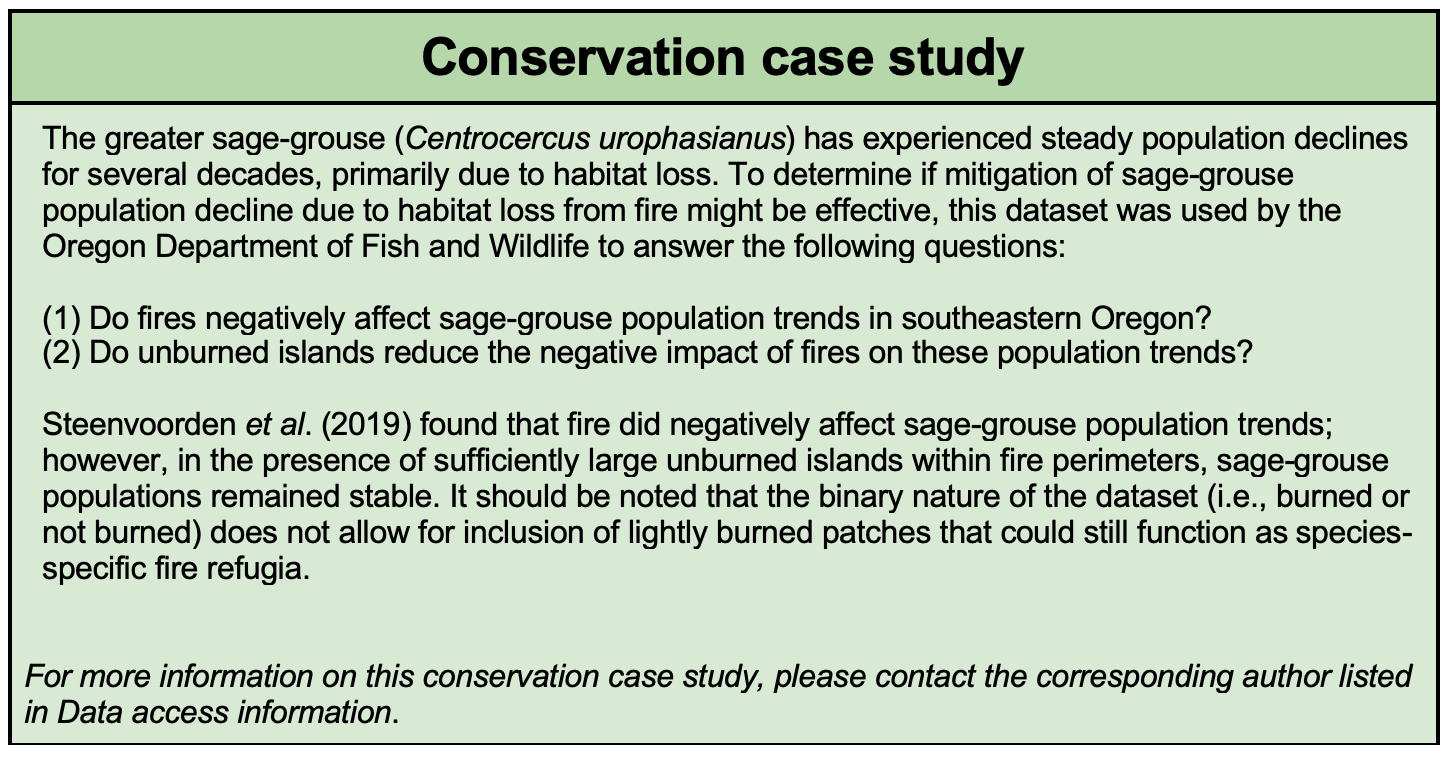 The dataset can be downloaded from: https://www.sciencebase.gov/catalog/item/59a7452ce4b0fd9b77cf6ca0.

Metadata can be downloaded from: https://www.sciencebase.gov/catalog/item/59a7452ce4b0fd9b77cf6ca0

Data type category (as defined in the Introduction to this guidebook): Fire

Units and range of mapped values: Not applicable because this dataset does not depict a range of values. Instead it depicts unburned areas as polygons.

Dataset truncation: The dataset is truncated along the following borders: United States border with Canada; Idaho border with Montana, Wyoming, Utah, and Nevada; Oregon border with Nevada and California.

Fire perimeters for 2,298 fires from 1984 to 2014 were obtained from the Monitoring Trends in Burn Severity (MTBS) database, which includes all fires of at least 405 hectares in the western United States. To detect unburned islands, pairs of Landsat scenes were compared: an immediate post-fire scene was compared with a scene from one year earlier from the same season, and a one-year-post-fire scene was compared to a pre-fire scene from the same season. A classification tree approach was applied to separate burned from unburned areas (fully described in Meddens et al. (2016), which demonstrated 89% classification accuracy when compared with field observations). Additional adjustments were made to account for the seasonal timing of vegetation greenness and to remove single isolated pixels that were identified as being fire refugia. The resulting gridded (raster) dataset was then transformed to a polygon shapefile dataset. For more information, please consult the dataset citation listed in section 2 of this chapter.

Polygons represent areas of the landscape that were unburned areas within larger fire perimeters, where fire refugia may exist.

Over recent decades, the size of fires in the western United States and the overall area burned each year has been increasing, attributable in part to climate change (Meddens et al., 2018). Thus, changes in fire patterns are a way in which climate-change exposure is manifested.

To the degree that fire refugia are maintained in constant locations from one fire to another (i.e., if they are determined by landscape characteristics such as topography or water availability), they may represent areas of resistance to changing fire dynamics. They may also play a role in resilience to disturbance events (e.g., fires) because they may provide seed sources from which plant species can recolonize surrounding burned areas and they may provide post-fire animal habitat. For these reasons, areas with lower densities of fire refugia might be more sensitive to changes in fire patterns. It should be noted, however, that this dataset catalogs refugia from individual fires but does not depict longer-term spatial patterns in the likelihood of refugia to exist (i.e., to persist from one fire to another).

The input data (Landsat scenes) used to produce this dataset had a spatial resolution of 30 m. The analysis removed single isolated pixels from being considered fire refugia. Therefore, fire refugia smaller than two Landsat pixels (1,800 m2) could not be detected, although such small fire refugia might play ecologically important roles in post-fire ecosystem recovery. The analysis that produced this dataset did not differentiate between unburned patches that function as habitat for wildlife from those that do not (e.g., bare rock).

This dataset was produced using an approach developed by Meddens et al. (2016), based on a study that analyzed field data from 19 wildfires. Field observations were used to calibrate and improve the model used to detect fire refugia from Landsat data.

Steenvoorden, J., A. Meddens, A. Martinez, L. Foster, and W. Kissling. 2019. The potential importance of unburned islands as refugia for the persistence of wildlife species in fire-prone ecosystems. Ecology and Evolution 9(15): 2045-7758.