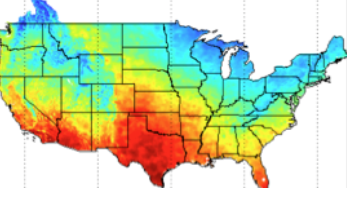 A new statistically downscaled climate model dataset covering the conterminous U.S. Statistical downscaling is one of two methods (the other is dynamical downscaling) that uses climate data produced at a large scale (such as global) to make predictions about future climate at a smaller scale (such as a particular watershed).  The downscaling process generates information that is useful for making decisions and adapting to the impacts of climate change on a local or regional scale.

We have used MACA to downscale the model output from 20 global climate models (GCMs) of the Coupled Model Inter-Comparison Project 5 (CMIP5) for the historical GCM forcings (1950-2005) and the future Representative Concentration Pathways (RCPs) RCP 4.5 and RCP8.5 scenarios (2006-2100) from the native resolution of the GCMS to either 4-km or ~6-km.

The MACA dataset is unique in that it downscales a large set of variables making it ideal for different kinds of modeling of future climate (i.e. hydrology, ecology, vegetation, fire, wind). The dataset includes the following variables:

We are currently dispensing 3 data products: MACAv1-METDATA, MACAv2-METDATA and MACAv2-LIVNEH.

The GDP houses large datasets, often the products of large-scale modeling efforts such as climate downscaling, and makes these datasets easier for scientists, managers, and the public to access and process the information for additional analyses.

Since 1889, the University of Idaho has been a place that expects more from itself, more from its students, more from knowledge and more from life.We offer a distinctive combination of outstanding majors and graduate programs, accomplished faculty, world-class facilities, renowned