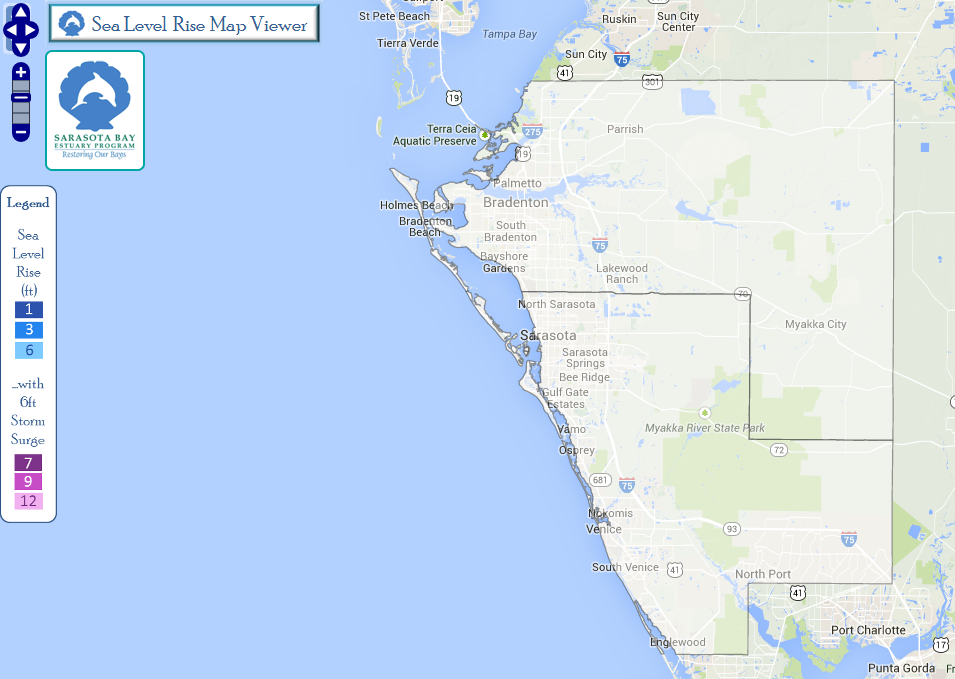 SBEP and its partners are aware of the potential long term impact of rising sea levels along the coast. Planning for changes to shorelines and the larger impact on the community will become increasingly important in the decades ahead. To support future planning, SBEP has created a Sea Level Rise web map tool that shows various scenarios based on different levels of water due to sea level increases and surges of water from occasional storms.

This pilot project is a collaborative effort of SBEP and Mote Marine Laboratory, with funding from the U.S. Environmental Protection Agency Climate Ready Estuaries Program. The areas shaded in blue show lands vulnerable to sea-level rise along the Sarasota Bay Estuary. The visualization tool shows an approximation of potential flooding in Sarasota and Manatee Counties, but not exact locations.

The analysis is based on the mean higher high water level obtained from LiDAR elevation imagery. The LiDAR data has a vertical accuracy of 0.60 feet (at a 95% confidence interval). The LiDAR data does not cover depth of water columns. All cells in the DEM grid below sea-level rise thresholds were designated as inundated regardless of hydrologic connectivity. The water levels shown are the flooding above the mean high tide level, but do not take into account the possibility of erosion, land subsidence, sediment accretion, or future construction. To display the potential flooding in the event of a hurricane driven storm surge, the map also illustrates (in shades of magenta) the extent of a Hurricane Charley-level storm surge for each sea level increase.

The Sarasota Bay Estuary Program is dedicated to restoring our area’s greatest and most important natural asset – Sarasota Bay.

The program strives to improve water quality, increase habitat and enhance the natural resources of the area for the use and enjoyment by the public. The health of Sarasota Bay has seen significant gains since it was named an estuary of national significance by the U.S. Congress in 1989.