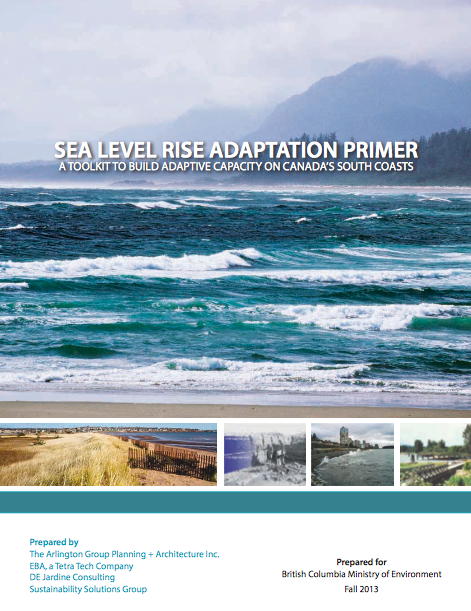 This Primer provides an introduction to past and future sea levels, an overview of four different adaptation strategies, a recommended framework for decision making and finally a total of 21 adaptation tools to support local adaptation action.

The B.C. Ministry of the Environment commissioned the preparation of this Sea Level Rise Adaptation Primer for Canada’s Atlantic and Pacific coasts. Although this Primer was prepared in B.C., legislative provisions, policies and local government applications discussed in this Primer include B.C., southern Quebec and the Atlantic coasts of New Brunswick, Nova Scotia, Prince Edward Island, Newfoundland and Labrador. Coastal communities along Hudson Bay and in the Arctic face a different set of vulnerabilities and were not considered within the context of this research.

Regulatory tools include the regulation of subdivision, land use and buildings. These regulatory tools are generally prescribed by legislation and require the approval of a decisionmaker or “gatekeeper” responsible for the protection of the public interest.

Structural tools consist of physical structures on land or in water to protect land and buildings from coastal hazards. A wide range of hard protection and armouring fit in this category.

Non-structural or soft armouring measures include the creation or restoration of wetlands, building sand dunes, or rehabilitation and beach nourishment. Both sand dunes and beaches are naturally occurring features, created by the interaction of wind, waves and sediment. They serve to dissipate the energy of storm surges and wave action. These natural features can be mimicked or recreated to provide an adaptive buffer to sea level rise.

The Sea Level Rise Adaptation Primer is a resource for coastal management authorities (mainly local governments) to help them identify and evaluate options for adapting to the impacts of sea level rise and associated hazards. The Primer is intended to be relevant for southern coastal regions across Canada with application to British Columbia, Quebec, and the Atlantic region.

The BC Ministry of Environment is tasked to foster and enhance a clean, healthy and naturally diverse environment. In 2009, the Environmental Stewardship and Parks and Protected Areas Divisions of the BC Ministry of Environment distributed Common Statements of Understanding and Working Principles related to climate change adaptation. These principles should be taken into consideration in all future projects and planning. The Ministry recognizes that it must prepare for and adapt to the unavoidable impacts rising greenhouse gas concentrations will cause throughout the Province.