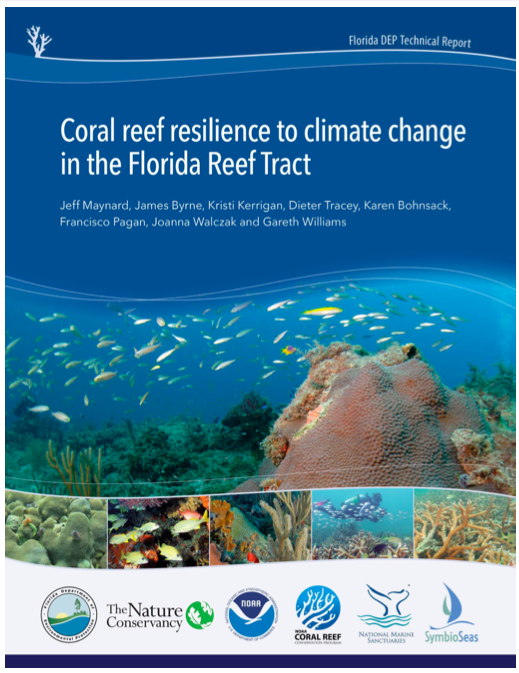 Coral reef managers everywhere seek to reduce vulnerability to climate change. In the most popular vulnerability assessment framework, vulnerability is a function of exposure to climate stress (e.g., the high sea temperatures that cause coral bleaching) and the resilience of the system to that stress (i.e., the system sensitivity and adaptive capacity, Turner et al. 2003). Reef resilience is defined as the ability of coral reefs to resist and recover from such disturbances while retaining essentially the same function and structure (Mumby et al. 2007). To reduce vulnerability, managers need to support the natural resilience of reefs by reducing their sensitivity to climate-related disturbances (Maynard et al. 2015). This requires reducing local stressors on reefs. The challenge for natural resource managers in Florida, as with everywhere else reefs exist, lies in deciding which actions to implement and where, to maximize the extent to which climate vulnerability is reduced. Understanding spatial variation in resilience can inform such management decisions.

Coral reefs are dynamic and complex ecosystems, whose function is controlled by myriad factors. However, recent research on the characteristics of resilient reefs has shown that despite this complexity, a few factors can be isolated as the most highly influential drivers of resilience. In particular, in their 2012 study McClanahan et al. identified 11 key indicators for reef resilience based on both the strength of empirical evidence, expert opinion, and feasibility of study; from this prioritized list, they developed a methodology for assessing resilience and informing site-specific management. Recently, Maynard et al. (2015; in press) translated the framework put forward by McClanahan et al. into guidance for the scientific and management community on how to assess coral reef resilience to support decision-making and inform management and conservation planning. Such resilience assessments have been completed in CNMI (Maynard et al. 2015), Hawaii (Maynard et al. 2016), Australia (Maynard et al. 2010), USVI, Indonesia and a range of other locations throughout the Pacific, Caribbean and Southeast Asia.

The overarching goal of this project was to assess the relative resilience of coral reefs in Florida to climate change.

Coral reefs along the FRT are located close to shore and co-exist with intensely urbanized areas, particularly in southeast Florida. They are subject to impacts from a variety of natural and human stressors including, among others, coral bleaching and disease, invasive species, marine debris, land based sources of pollution, recreational and commercial misuse, and coastal construction. Identifying resilient reef areas and better understanding their interaction with human stressors can help inform management strategies to better protect coral reefs in the future.

This project is a collaboration co-funded by NOAA’s Coral Reef Conservation Program, the Florida Department of Environmental Protection, and The Nature Conservancy’s Florida office.

Objectives
This is one of the few reports that takes a holistic view of the Florida Reef Tract. Though divided among different counties and other management regimes, reefs within the FRT have similar ecology and have similar values socially. It is critically important that the scientific and management community examine the entire FRT in identifying areas with relatively more and less resilience to climate change.

The project objectives were to: 1) assess the relative resilience of reefs within the FRT to climate change, and 2) identify next steps for this research area and for sharing and translating information within the report into management and conservation action.

The NOAA Coral Reef Conservation Program (CRCP) is a partnership between the NOAA Line Offices that work on coral reef issues: the National Ocean Service, the National Marine Fisheries Service, the Office of Oceanic and Atmospheric Research, and the National Environmental Satellite, Data and Information Service. The CRCP brings together expertise from across NOAA for a multidisciplinary approach to managing and understanding coral reef ecosystems.

The Office of National Marine Sanctuaries serves as the trustee for a network of underwater parks encompassing more than 600,000 square miles of marine and Great Lakes waters from Washington state to the Florida Keys, and from Lake Huron to American Samoa. The network includes a system of 13 national marine sanctuaries and Papahānaumokuākea and Rose Atoll marine national monuments.