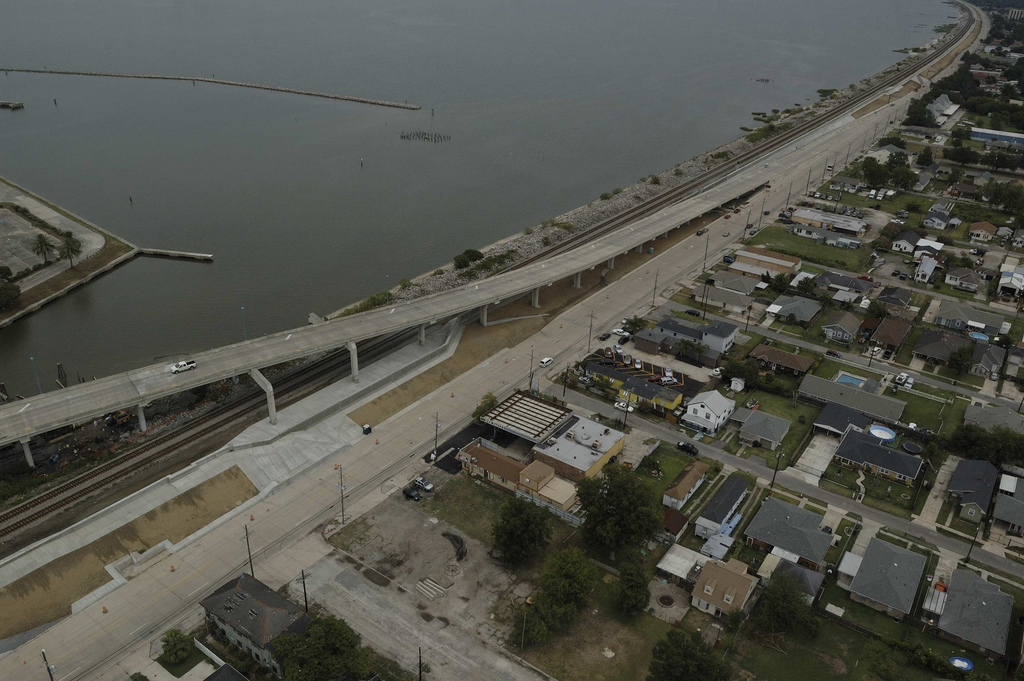 The Greater New Orleans Urban Water Plan is a 50-year plan that proposes to use water system upgrades and urban design projects to reduce flood risk and improve stormwater, surface water, and groundwater management in New Orleans, Louisiana. By creating an integrated living water system, the plan will enhance the quality of life for New Orleans residents, help create viable wildlife habitat, and enhance the resilience of the city in the face of climate change. The plan was developed by a diverse project team, and incorporates ideas from Dutch frameworks for water management. Project partners hope that this plan will not only reduce flood risk in New Orleans and slow rates of local land subsidence but also help the city transition from viewing water as a liability to viewing water as a community asset.

The City of New Orleans, Louisiana, faces significant water challenges. New Orleans is located in the Mississippi River Delta, and more than half of the city is below sea level, making it vulnerable to both rainfall-related flooding and storm surge. Rainfall-related flooding is projected to cost the region more than $8 billion over the next 50 years, in addition to costs associated with flood damage as a result of sea level rise and storm surge.

Current management practices and infrastructure exacerbate these flood risks. For example, the city currently pumps all stormwater out of the city, which limits groundwater infiltration and exacerbates land subsidence trends. The city has an extensive levee system, but the long-term costs to maintain these systems are extremely high, especially as system integrity is threatened by rising sea levels and high rates of land subsidence. In general, New Orleans currently views water as a liability rather than a municipal asset.

To address these issues and reduce flood risk for the city, regional partners are collaborating to redesign how New Orleans perceives and manages water through an integrated water management plan. In 2010, the State of Louisiana Office of Community Development Disaster Recovery Unit provided funding via Disaster Recovery funds from a federal Community Development Block Grant sponsored by the Department of Housing and Urban Development. Greater New Orleans Inc. administered the $2.5 million in funding, selecting Waggoner & Ball Architects and their assembled design team to lead plan development. Plan implementation is being funded separately.

Specific goals in developing this plan were to: 1) refashion the New Orleans-water relationship to reflect the specific condition of living in a delta, 2) establish a regional water management authority to improve cross-jurisdictional management of stormwater and groundwater, and 3) to conduct system retrofits and implement urban design projects to slow and store stormwater, circulate surface water, recharge groundwater, create vital water-based public spaces, and incorporate natural elements and processes into the operation of an integrated living water system.

In Fall 2011, Waggonner & Ball Architects was selected to lead the creation of the Greater New Orleans (GNO) Urban Water Plan. Waggonner & Ball assembled a diverse planning team and leveraged previous collaboration efforts to inform plan development. For example, the planning team included local, regional and international participants, including partners from the Netherlands. Similar to New Orleans, Dutch cities face significant flood risks, but have used natural and engineered solutions to manage these challenges and prepare for up to a 10,000-year flood event. In addition, Dutch drainage systems are designed to be a part of the public sphere, to enhance quality of life, and to create viable wildlife habitat. Prior to beginning work on the GNO Urban Water Plan, David Waggonner (president and principal of Waggonner & Ball Architects) helped organize a series of “Dutch Dialogues” workshops to facilitate idea and knowledge sharing between Dutch engineers, urban designers, landscape architects, city planners, soils and hydrology experts, and other professionals and their New Orleans counterparts to begin addressing water management issues in New Orleans. The results of these workshops were further developed through the GNO Urban Water Plan.

Over the two-year plan development process, the planning team engaged in a variety of studies and inter-sector dialogues to ensure that relevant information and adaptive capacity were incorporated into the GNO Urban Water Plan. The planning team met with system operators, held design and planning workshops, and held meetings focused on examining technical topics related to subsidence, geomorphology, finance, existing infrastructure, and other themes. The team specifically analyzed how changing rainfall patterns may affect stormwater management and 5/10/50 year flood events in the city by incorporating higher precipitation levels (5% higher than current average) in all modeling efforts. By anticipating climate-driven shifts in annual rainfall, the team was able to design project and plan components that take into account potential increases in precipitation that would further elevate flood risk. In addition, the team studied the history of New Orleans to better understand how social perception and management of water has changed over time.

The Greater New Orleans Urban Water Plan was published in 2013. It outlines a 50-year program of system retrofits and urban design opportunities for achieving a safer and more sustainable balance between land and water systems in the city. By creating an integrated living water system, the GNO Urban Water Plan will allow natural infiltration of stormwater to balance groundwater levels and slow subsidence and provide improved aquatic habitat for wildlife, and will also integrate water into public space. For example, the development of water-based public space, such as canal-side parks or publicly accessible wetlands, can be used to shift the public’s perception and relationship with water while simultaneously providing environmental and adaptation benefits.

The GNO Urban Water Plan is tailored to a variety of professionals. It consists of three published components: 1) a Vision volume, which gives an overview of the entire plan, 2) an Urban Design volume, which was written for planning and design professionals, and 3) an Implementation volume, which was written for policymakers, water system managers, and other stakeholders. This plan is available online, along with a series of other reports generated through the plan development process. These resources include: system design and analysis reports related to water systems, groundwater, and ecosystem services; case studies of seven demonstration projects; and urban design and system analyses, which outline opportunities for adapting existing canal, road, and transportation infrastructure across multiple project scales.

The GNO Urban Water Plan covers St. Bernard Parish and the east banks of Orleans and Jefferson Parishes. The plan area reflects local hydrology rather than political boundaries, and includes three hydrologic basins. Organizing the plan based on hydrology facilitated collaboration between different parishes by avoiding typical political hot topics and focusing on shared hydrological issues. In addition, the plan focuses on urban water, including stormwater, surface water, and groundwater, as the U.S. Army Corps of Engineers is undertaking a separate effort to address storm surge. A majority of the plan leverages existing infrastructure, proposing system upgrades and changes to operation rather than a complete replacement, in order to better manage stormwater and reduce flood risk.

In the near term (5–6 years), project partners are focusing on the implementation of various plan components. These pilot projects will help increase public education, demonstrate plan principles, and help fine-tune various plan components to reflect unique New Orleans soil and hydrologic conditions. Funding for implementation must be secured separately, but the city has found several funding streams to begin project implementation. New Orleans was selected as one of the Rockefeller Foundation’s “Re-Invest” Initiative Cities, and received roughly $2 million from the foundation to begin implementation. In addition, New Orleans has received roughly $80 million in FEMA Hazard Mitigation funds for local neighborhood infrastructure improvements and hazard mitigation. Projects currently being implemented include: installation and monitoring of a network of bioswales and rain gardens in the Pontilly neighborhood; transformation of five vacant lots around the city into rain gardens to test green infrastructure principles and monitor changes in runoff; and construction of a linear park along the Lafitte Greenway/Blueway, the first step in a larger project to restore hydrological connectivity between different parts of the city and bring water back into the public sphere. The city received FEMA funding approval for a large project called the Mirabeau Water Garden, which aims to demonstrate neighborhood-scale water retention measures, facilitate stormwater infiltration, and serve as a public recreation facility. This project was identified in the GNO Urban Water Plan, and will be one of the largest urban wetlands in the country once completed.

Funding for these and other large projects are actively being pursued by the New Orleans Redevelopment Authority and the Sewerage & Water Board of New Orleans, along with several municipal departments, including the Mayor’s Office, the Office of Resilience, and the Department of Public Works. Despite this positive progress, significantly more funding will be needed for complete plan implementation; plan developers estimate that total plan implementation will cost roughly $6 billion but yield over $20 billion in benefits (e.g., reduced flooding and insurance premiums, increased property values). Although federal and other grants can help reach this goal, New Orleans must also proactively invest in its own infrastructure by promoting a thriving economy and developing internal funding streams for resilient stormwater management.

Moving forward, project partners hope to increase communication and collaboration with public agencies to integrate the GNO Urban Water Plan into policy, and to help parishes develop new comprehensive zoning ordinances that will facilitate stormwater management. One challenge facing this process is that there is currently no legal force behind the GNO Urban Water Plan. The State of Louisiana funded plan development, but there is no local body directly responsible for plan implementation. In addition, New Orleans has no central authority for managing both stormwater and groundwater; rather, each jurisdiction (e.g., parish) does so independently. With no one in charge, and without a formal incentive to manage water in an integrated way, implementing the GNO Urban Water Plan will require significant structural reform. However, current collaborative efforts on both the municipal and grassroots level prove this isn’t impossible, and all groups are working hard to identify their roles and capacity for the future.

Throughout this process, project partners have found that incorporating city history and engaging the public has facilitated success in communicating the principles of the plan. In trying to shift public perception from water as the enemy to water as an amenity, the project team highlighted how water was the founding feature of New Orleans. Canals were used to connect the Bayou St. Johns to the French Quarter, and homes and public gatherings were oriented around local waterways. Further, some of the most vibrant parts of contemporary New Orleans, including Bayou St. Johns and public parks, revolve around existing water bodies. The project team uses its public outreach to demonstrate how the GNO Urban Water Plan can help enhance local identity and quality of life.

Moving into the future, the project team hopes to change the way New Orleans operates in relation to water. From a policy standpoint, the team hopes that in the next 15–20 years, pilot projects from the plan will transition to city-wide changes, leading to alterations in design standards and public works projects that improve the management of stormwater and reduce flooding. During the planning process, each city pump station was assigned a specific volume of water it would have to pump given a 10-year storm event, with higher numbers reflecting a higher flood risk for the adjacent area. The team is currently tracking water assignments at different pump stations in the city, and hopes that as projects and policy measures are implemented, water assignments at each pump will drop to zero, representing mitigated flood risk. Currently, there is limited funding to continue this monitoring, and there is no review process in place for future evaluations of the plan’s effectiveness. The project team aspires to secure funding within the next several years to finance continued monitoring of municipal pump stations and to design and implement an plan review process in order to incorporate lessons learned and to keep the GNO Urban Water Plan up-to-date with changing needs and conditions as the city and the region evolve.