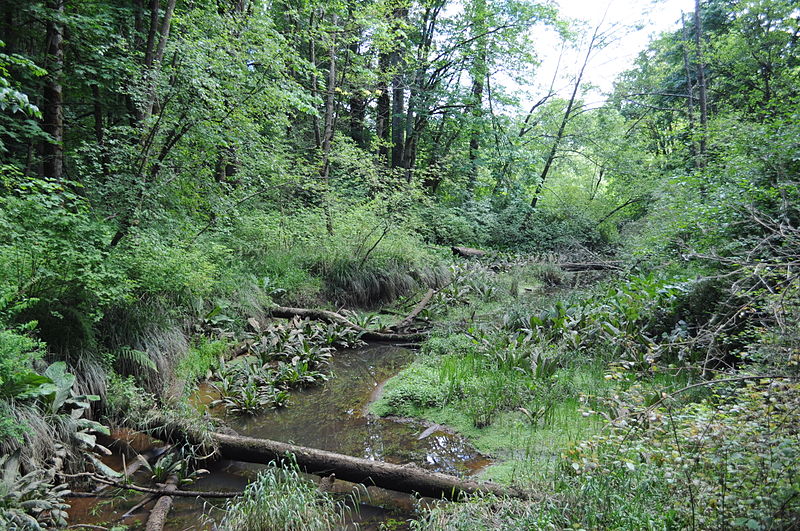 Photo attributed to Joe Mabel. This file is licensed under the Creative Commons Attribution-Share Alike 3.0 Unported license. No endorsement implied.

The Pacific Northwest (PNW) region is characterized by wet, mild winters and warm, dry summers. It lies within a climate gradient in which the southern end of the region experiences the greatest seasonal variation (i.e. coldest/wettest winters and hottest/driest summers). It is divided by the Cascade Mountain Range that runs north-south from Washington to Oregon. The landscape west of the Cascades is dominated by moist coniferous forests and the lower elevations east of the Cascades are dominated arid shrublands and grasslands.

The region has warmed nearly 2°F since 1900, resulting in decreased snowpack, increased wildfires, and drought. Habitat suitability has also shifted, forcing organisms to move along climate gradients in order to track the same temperature regime. Riparian habitats have long been cited as a means to facilitate movement of species along these corridors because their microclimates are cooler compared to surrounding areas. Like stepping stones, animals can use these zones to disperse more easily as they travel to their preferred climate.

Blanket solutions calling on land managers to restore all riparian zones overlook that these corridors differ in quality and protection status. The study Identifying riparian climate corridors to inform climate adaptation planning aims to help managers decide where to best focus their actions by calculating a riparian corridor index. The index values were found by calculating flow direction, accumulation, and length. Additionally, the corridor’s GAP status provided by the U.S. Geological Survey’s GAP Analysis Program (GAP) was used to determine the extent to which high-scoring riparian areas fell within designated protected areas.

The index considers the following variables:

The study found that steep, mountainous regions with dense forests scored the highest, while flat, modified regions scored lowest. High-quality corridors within flat regions were also the least likely to be protected, indicating that land managers should prioritize conserving these vulnerable areas.

Important caveats not captured in the index include:

Despite the limitations and potential unintended consequences, the index is still a promising way to identify the best areas for conservation. Although the study focuses on the PNW, the process for calculating the index can be applied nationwide as the analysis considered values across hydrologic unit codes (HUC), which are used to classify watersheds throughout the United States.

The Climate Impacts Group (CIG) is an internationally recognized interdisciplinary research group studying the impacts of natural climate variability and global climate change (“global warming”). Research at the CIG considers climate impacts at spatial scales ranging from local communities to the entire western U.S. region, with most work focused on the Pacific Northwest (PNW). Through research and interaction with stakeholders, the CIG works to increase community and ecosystem resilience to fluctuations in climate.

OUR MISSION: To apply human ingenuity to the preservation of species, populations, and ecosystems using scientific principles, innovative approaches, and lasting partnerships with conservation practitioners.

Conservation Science Partners is a 501(c)(3) nonprofit collective established to meet the analytical and research needs of diverse stakeholders in conservation projects. We connect the best minds in conservation science to solve problems in a way that’s comprehensive, flexible, and service-oriented.